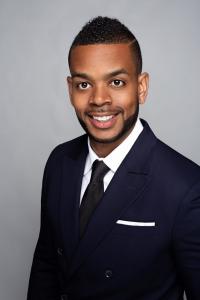 John Burns is an attorney, tv/radio personality, and community activist. He is a supporter of USA Fibroid Center’s efforts to create more awareness about fibroid disease. 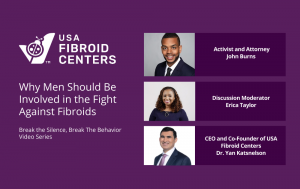 USA Fibroid Centers is a national network of outpatient medical centers specializing in the non-surgical treatment of uterine fibroids.

When our staff did the first Uterine Fibroid Embolizations, we realized how much we changed the lives of women whose lives were so affected by this condition.””
— Yan Kastnelson, M.D., USA Fibroid Centers Founder and CEO

NORTHBROOK, IL, USA, June 21, 2021 /EINPresswire.com/ — Washington D.C. Entertainer Attorney John Burns who produced the documentary “I am a Dreamer” with the Motion Picture Association, spoke out about the need for men to become a part of the solution for women suffering from fibroid disease in a recent episode of USA Fibroid Centers’ Break the Silence, Break the Behavior Video Series. Burns joined USA Fibroid Centers Founder and CEO Yan Katsnelson, M.D., in the YouTube series that explores the social, emotional, physical, and economic costs on the estimated 26 million American women who suffer from fibroid disease.

Burns, who said he was shocked after learning about the volume of women that are affected by fibroids, is also a Co-Founder of The Burns Brothers, a multicultural marketing agency that champions culture, diversity, and inclusion causes. One in three women will be diagnosed with fibroids, and 80% of African American women have fibroids. Of the 26 million American women diagnosed with fibroids, 10 million are symptomatic. Uterine fibroids are also the most common cause of hysterectomies and fertility problems in the United States.

“We need to give women the awareness they need to make the best healthcare decisions for themselves and their families,” said Katsnelson. “While physicians guide women towards safeguarding their health from heart disease, high blood pressure, smoking, and obesity, they often don’t discuss menstruation, sexual health, and fertility,” he added. “Many are unaware of the advances made in minimally invasive procedures, such as Uterine Fibroid Embolization (UFE), which is an outpatient procedure that allows a patient to return to normal activities within hours.”

What Burns found compelling is that a solution exists that doesn’t involve surgery. “It highlights the critical need to build awareness and education about fibroids and treatment options,” Burns said. “Learning provides me with the ability to drive change.”

Women’s reproductive health and rights are often viewed solely as a women’s issue. Yet, achieving health equality is impossible without engaging men. “If women’s health is at risk, then everyone’s health is impacted,” Burns said. “It is important to know about fibroid disease because it affects our mothers, sisters, and aunts. Men must be advocates for them."

The annual direct current cost of fibroids, including surgery, hospitalizations, outpatient visions, and prescription medications ranges from 4.1 to 9.4 billion dollars. But that doesn’t account for the physical and emotional cost that dealing with fibroids entails.

Burn feels there’s a lot men should know about the unique health concerns facing the women in their lives. “There’s so much that fibroids affect for women dealing with this condition from their mental, social well-being to even their careers and having a family.”

A Harvard-trained heart surgeon, Katsnelson said he became interested in treating conditions with minimally invasive procedures as advances in science and medicine transformed big surgeries into office-based treatments. His interest began in improving vein and vascular treatment and then expanded to fibroids. “When our staff did the first UFEs” he said, “we realized how much we changed the lives of women whose lives were so affected by this condition.”

Katsnelson soon realized that there was a need to spread awareness and education not only to other medical professionals, but to women themselves. “UFE is a known procedure, covered by insurance with an excellent success rate, but most people have never heard of it,” he said. “It was a discovery for me as a doctor that so much is unknown about fibroid disease that it has turned into a mission to help.”