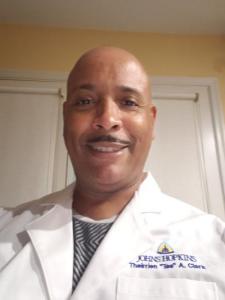 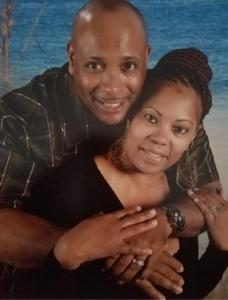 “Tee” and his wife Marcy both agree that they will take the vaccine. 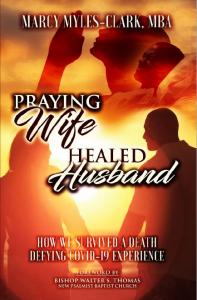 Using her journal entries, medical records and a series of communications with her husband’s medical staff, family and friends, Marcy Myles-Clark recounts their fight with COVID-19 in new book

Eight months after experiencing the fight of his life, Howard County legal professional, Theirrien Clark is honored by the hospital that saved him.

It was a very emotional and rewarding opportunity to be able to give a detailed recap of my experiences during my hospitalization. I was their longest and sickest patient in the ICU when this started.”
— Theirrien “Tee” Clark

BALTIMORE, MARYLAND, UNITED STATES, March 1, 2021 /EINPresswire.com/ — Theirrien “Tee” Clark one of Howard County’s first COVID-19 cases received an honorary Doctor’s White Coat from John Hopkins Hospital for his miraculous recovery after a 46-day hospitalization. The White Coat Ceremony is a rite of passage for medical students and was created by the Arnold P. Gold Foundation in 1993. During the ceremony, a white coat is placed on each student's shoulders and often the Hippocratic Oath is recited, signifying their entrance into the medical profession.

“On December 18, 2020, I was recognized (virtually) by Johns Hopkins, and given an honorary Doctor’s White Coat during their traditional annual white coat ceremony for incoming medical students. I was able to share my story for these future physicians, and I let them know just how valuable their work is to patients and families like me and mine. It was a very emotional and rewarding opportunity to be able to give a detailed recap of my experiences during my hospitalization. I was their longest and sickest patient in the ICU when this started.”

When Theirrien “Tee” Clark's wife Marcy dropped him off at Maryland's Johns Hopkins Howard County General Hospital on March 20 of last year for a quick imaging test. She waited in the parking lot for his return, neither was unduly concerned. The couple had been diagnosed with COVID-19 a few days earlier. Marcy’s symptoms remained relatively mild, while Tee developed a progressive cough. Tee’s doctor ordered the test as a precaution because his cough wasn't getting better.

Tee never came back to the car that night. A chest X-ray showed he was in lung failure; the doctors needed to insert a breathing tube immediately. "I was halfway out of it from the medication and let me tell you, my eyes woke up really quickly when they said lung failure,” says Tee, who was transferred to The Johns Hopkins Hospital in Baltimore, where he remained on a ventilator for four weeks and stayed for 46 days. There were multiple instances when doctors weren’t sure if Tee would live, he was given a less than 15% chance of survival, while on the ventilator.

He began to recover Easter Passover week after weeks of collective prayers from family and friends. Tee was removed from the ventilator on 4/17. Finally, he was released from the hospital on (5/6/20), one day after he and Marcy’s 5-year wedding anniversary.

"My friends and family have affectionately named me “Dr. Tee”. I tease my Hopkins physicians that I am now their colleague, and that we can hold future appointments in the employee lounge, now that I have my white coat. I get lots of smiles on that one. They are very excited and proud of my progress.”
The couple both agree that they will take the vaccine. Marcy Myles-Clark, who is also a (20+ year veteran) pharmaceutical rep, says, “we are really looking forward to resuming our pleasantries, and we've also talked about early retirement plans and travel, including purchasing a Winnebago or Sprinter and cruising the country.”

One year after the couple’s battle with COVID-19, Marcy Myles-Clark is set to release her debut book, Praying Wife, Healed Husband, a riveting account of Marcy’s spiritual fight on behalf of her husband, Tee. Using her journal entries, medical records and a series of communications with her husband’s medical staff, family and friends, Marcy recounts how she remarkably and relentlessly stirred up a bounty of prayer warriors to breathe hope into a hopeless situation—and bring her husband home.

Theirrien “Tee” Clark and his wife Marcy both advocate for taking the vaccine. He received his first shot at the end of February.

To learn more about the couple’s journey and about the book, visit www.PrayingWifeHelps.com.