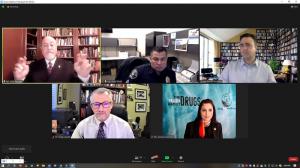 Foundation for a Drug-Free World 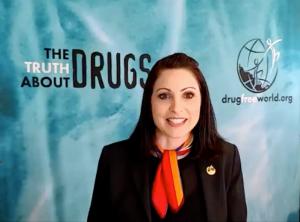 To launch Red Ribbon Week across the nation a virtual conference of experts discusses best practices to avert the crisis of spiraling drug-related deaths.

LOS ANGELES, CALIFORNIA, UNITED STATES, October 26, 2020 /EINPresswire.com/ — With U.S. drug overdose deaths on track to beat all previous records, Foundation for a Drug-Free World’s virtual Red Ribbon Week conference held October 21 brought together a team of highly experienced drug-prevention specialists to discuss strategies to avert the catastrophe. According to the National Institute on Drug Abuse, drug and alcohol abuse costs more than $500 billion annually in crime, lost work productivity and health care. The United Nations Office on Drugs and Crime has found that every dollar spent on prevention can save governments up to ten dollars in later costs.

The conference was moderated by Ms. Jessica Hochman, executive director of the Foundation for a Drug-Free World, with international headquarters in Los Angeles. The panel of experts included:

* Mr. John Redman, CEO of Community Alliances for a Drug Free Youth who served as Director of Demand Reduction for California High Intensity Drug Trafficking Areas
* Sgt. Rudy Perez, a 19-year veteran of the Los Angeles School Police Department (LASPD), Adjutant to the Chief of Police for the LASPD and Vice President of the National Association of School Resource Officers
* Dr. Greg Londot, educator and recipient of PTA Teacher of the Year Award for the State of Arizona 2008
* Mr. Darren Tessitore, Founder of Drug Educators Alliance, who has trained more than 10,000 educators with the Drug-Free World Truth About Drugs materials

“Our chances for success increase exponentially by empowering youths with facts they can truly grasp as their own, facts concerning the real physical and psychological harm of drugs and how they affect their lives,” said Redman. “That is why the Truth About Drugs program is no longer simply a must for our communities; it is now an imperative.”

Sgt. Perez is accustomed to facing challenges in Los Angeles, one of the largest school districts in the nation with close to 700,000 students in 23 cities. The LASPD’s concentration is on mentoring, protecting, and leading kids safely through to graduation. Describing current drug trends with visuals on what police have learned to look out for, Sgt. Perez urged parents to talk to their kids if they suspect they are taking drugs.

Dr. Londot, who works with students age 11–13, stressed the importance of making the classroom a safe environment for kids to speak their minds and concerns. He told of a young girl who confided in him that her parents took cocaine and she had to grab her kindergarten-age brother to escape with him to a neighbor’s apartment to keep him safe.

In his drug-education research, Londot tried many programs before finding Truth About Drugs. “This program answers all their questions and gives real stories from real people, empowering them with the tools to refuse drugs,” he said. Another student who took part in his program told Londot she had been approached by a drug dealer on the school bus. Thanks to what she learned from the Truth About Drugs, she responded, “Are you crazy? Do you know what this does to your brain?”

Mr. Tessitore discussed the best practices in youth drug education. He presented the Drug-Free World program and showed how to put it to use. “Drugs have been sensationalized especially on Instagram, Snap Chat, Facebook and TikTok,” he said, “but when kids are properly educated, they don’t want to do them.”

Most years, Red Ribbon Week includes outdoor events for youth to take action against drugs and crime. This year, with the pandemic, one goal of the conference was to provide Red Ribbon Week resources to parents and educators that can be done online.

Ms. Hochman offered the 14 free Truth About Drugs online training courses, which cover each of the most commonly abused drugs and are available in 20 languages at drugfreeworld.org/course.

Foundation for a Drug-Free World is a volunteer-based organization. There are hundreds of groups internationally with many of them hosted by Churches of Scientology. The Church is the main sponsor of the program enabling the Foundation to provide this secular program and materials free of cost to drug educators worldwide.

The Truth About Drugs documentary