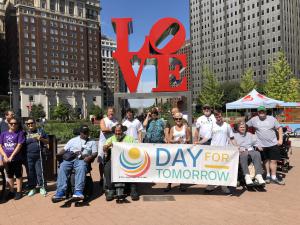 Roads found inaccessible and unsafe; Further work to target interviewing persons with disabilities regarding their experiences in extreme weather

WASHINGTON, DISTRICT OF COLUMBIA , UNITED STATES, September 19, 2019 /EINPresswire.com/ — Drs. Marcalee and Craig Alexander have completed a 700 mile walk to the United States Capitol from Campobello Island in New Brunswick, Canada to highlight the need for better accessibility for walking and wheeling on our roads and to find persons with disabilities to tell their stories about extreme weather, climate change and disability. With the growing climate crisis, both doctors left their positions in rehabilitation to focus on the issues of accessibility, feasibility of walking in the US and how disasters and climate change have and will impact persons with disabilities. Along the route, they found not only are our roads inaccessible but they did not see one person in a wheelchair going from town to town on the route.

Marcalee Alexander notes, “To live in the US and not in a city you need to have a car. This leads to discrimination against the poor. Moreover, if you want to walk from town to town, it is generally unsafe. Without sidewalks and often with no shoulders, our roads are difficult for able-bodied people to use, and are impossible for people in wheelchairs to use. Additionally with temperature extremes, people are more likely to remain indoors. We need to address the walk-ability of our roads along with the only war we need, a war against climate change, to sustain everyone's quality of life and health.”

Along the way, Marcalee Alexander worked with city officials and community groups to hold climate justice walks for persons with disabilities in New York City and Philadelphia and spoke at 7 medical schools about the issue. "Unfortunately, health care professionals are not adequately informing people with disabilities about how to prepare for extreme weather events, and cities are inadequately equipped as to how to help people with disabilities in weather disasters such as Dorian. With the increased frequency and strength of extreme weather events and the climate crisis, this is a human justice issue that requires immediate attention."

As a culmination to their walk, Drs. Alexander are working to launch "Day for Tomorrow" on 9/22/19. Otherwise explained as “People Day”, the title was coined because we cannot accurately predict tomorrow’s weather as we did 30 years ago. People with disabilities are already impacted around the world by climate change and we need to focus on the impact of climate crisis on the most vulnerable people such as those with disabilities and those on the front line, and not just the earth. Persons with disabilities and the elderly are especially vulnerable in extreme temperatures. Right now, people are relatively imprisoned indoors due to the weather. Moreover, those with disabilities need special attention during hurricanes and anticipated flooding, being unable to go to shelters with wheelchairs or personal care assistants. Inadequate accommodations are also available for the elderly, persons with head injuries and autism who cannot tolerate large open areas with many people.

On September 22 between 1-4, Marcalee and Craig Alexander will be on the National Mall providing information about Day for Tomorrow. In addition, there will be gatherings for Day for Tomorrow in places such as Moshi, Tanzania, Chapel Hill, North Carolina and New Delhi, India. Around the earth, on Day for Tomorrow people are encouraged to knock on their neighbor’s doors so they know if they have any needs that are unique in a weather disaster and to engage in some type of “green” day.

“The recent attention given to the climate crisis is wonderful. The issue is we need action now by all facets of humanity. As climate change worsens, we will all be older, possibly disabled ourselves and more vulnerable. The climate emergency is everyone’s problem and a human justice issue that we need to address now. Join us by taking action on the Day for Tomorrow.”

Marcalee Alexander is also working to start a nonprofit organization, Telerehabilitation International that will focus on educating people about quality of life issues, especially those related to climate change and disability. She also sees telemedicine as a green solution to dealing with disasters and the organization will work to start a network of rehabilitation physicians that are willing to volunteer to provided physician to physician consults for persons with disabilities in disaster areas.

For further information contact, Marcalee Alexander at canadatokeywest@gmail.com or 775-343-9322.